A few months back I stumbled across a tumblr page and said to myself, “I need to know this human.” Every fangirl loves television, but very few are courageous enough to make the leap into the industry. Lauren is a lady whose unabashed admiration for BAMFs and A+ TV has translated into a burgeoning career for her 23-year-old self, and she was kind enough to let me interview her for the fangirl spotlight.

K: How did you become a fangirl?

L: I definitely was born a fangirl. Looking back through old pictures and videos you’ll find I was crazy in love with all things Disney, Barbie, and Rugrats. As I got older it evolved to the pop stars and boy bands and then in my teenage years it was television shows and Broadway musicals. But I didn’t realize fangirls were a thing until my mid-teens when I started watching Grey’s Anatomy. I started watching the show towards the end of Season 2 — the bomb episode — and became hooked instantly. After that it was a crazy spiral of Grey’s creys, message boards, Myspace forums (it was 2005, people!), and basically me doing whatever I could to get my hands on info about that show. 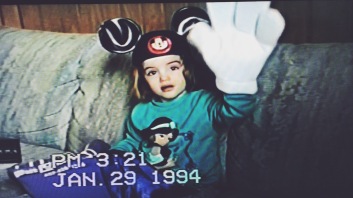 K : So obviously you’re a BAMFy working lady. Could you share some insider TV wisdom with us that your average fangirl wouldn’t know?
L : Celebrities read everything people write about them on social media. Whether they’re between takes on set, sitting in the makeup trailer, flying back-and-forth between New York City and Los Angeles, or just perusing the internet like many of us do before bed, celebrities are on Twitter and Tumblr reading all of the kind, creepy, and crude things people are writing. Stars become quite familiar with the fans that tweet them incessantly, whether the messages are good or bad. If you want to tell Viola Davis that she’s absolutely slaying it on How to Get Away with Murder? Go for it. Freedom of speech is a wonderful thing. Bad impressions however, are not so wonderful. Just be mindful, guys!
K: Yeah folks, keep it classy. So no pressure, but what is the best episode of television your eyeballs have ever watched?
L: I am weeping. This question is worse than a parent having to pick a favorite child. Comparing 30 Rock to House of Cards would be like comparing apples to cardigans. I will argue that The West Wing’s “Two Cathedrals” has some of the most remarkable monologues I have ever seen. Orphan Black’s cinematography in the second season cannot be beat. The Good Wife’s “Hitting the Fan” just kills it in acting, pacing, plot, and score. Parks and Recreation has me cackling like an idiot each and every week because I find it so funny. The other night I watched episode 201 of House of Cards and almost literally lost my mind over what had happened in the episode. Can I plead the fifth for this?
K: Who is a real life hero you have?
L: My mother. She is a strong BAMFY lady who works hard, puts up with a ton of BS on the daily (including my own), is one of the most courageous women I have ever met, and is just overall one of the most kind and hilarious of people. She is one of my best friends and I attribute all of my success and accomplishments to her. 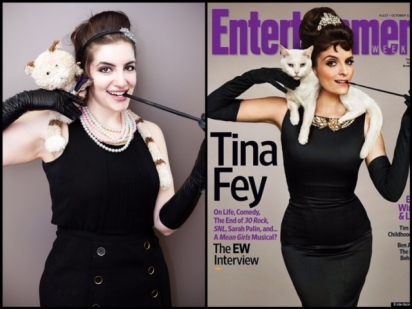 Another obvious hero of mine is Tina Fey. I was introduced to Tina’s work around age ten or eleven and I just thought she was the coolest. I would sneakily stay awake and watch SNL as a kid just to see her do Weekend Update because she was so pretty, talented, funny, and smart. Once I realized she was also from Philly and had a love of Star Wars, and was also writing and producing her own television show, I knew she was the ultimate celebrity role model. She is still one of my all time favorite people on this planet, and I feel like that’s the understatement of the century.
K: You get hired to write a pilot for NBC. What’s the plot and who is your dream cast?

L: As a writer, I try to remain cryptic when it comes to sharing pilot ideas, but I will say that I aspire to write a show about family. I come from a crazy, wonderful, dramatic, and hilarious family who have provided me with two decades worth of material.  I also would love to create a TV show that passes the Bechdel Test. I love strong badass women and it would be a dream to create a show with lots of strong and diverse Lady BAMFs that will inspire people.

Dream cast would naturally include some major Lady BAMFs who excel at comedy and drama. It would be a dream to work with women like Allison Janney, Christine Baranski, Kerry Washington, and Julia Louis Dreyfus, because they are such powerhouses, but are also hilarious and are good at doing the funny too. Also obviously it would be the ultimate dream to ever work with Tina Fey or Amy Poehler for obvious reasons.
K: I feel like we’re doing a badass job of passing the Bechdel test right now. What’s the most Liz Lemon thing you’ve ever done? 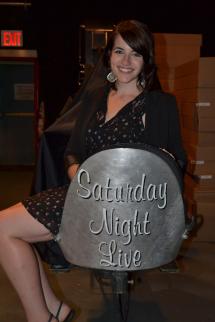 L: I have definitely sat on my couch passively watching exercise videos before without actually partaking in the fitness. Once while at a bar in New York with my colleagues from NBC, a perfectly nice boy asked if he could buy me a drink. The thing is, I already had a drink. I politely declined. Meanwhile, I was starving and wished he would’ve offered to buy me food instead. The third being that I interned in Studio 8H, the SNL studio, while in college. I would say that’s pretty Liz Lemon, yeah?

K: Any wisdom for a fangirl who’s not sure she’s got what it takes to translate her fangirl passions into a career?

L: For me, I gain inspiration from Lady BAMFs — specifically ones that work in my field. I look at Tina Fey, Shonda Rhimes, Amy Poehler, Emily Mortimer, and dozens other women making waves in the entertainment industry and think about their positive attributes that allow them to succeed. They’re passionate, wicked smart, have remarkable amounts of perseverance, and are unafraid to create content and put it out into the world. I find myself constantly thinking “what would ______ do in this situation?”  and try to push myself to be half as good as these remarkable women.

My advice for the younger fangirl trying to turn her passions into a career is to find the people that inspire them. Find people they can connect to who make them want to be better and do better. Fangirls are passionate for a reason. It’s just a matter of taking that energy and excitement and channeling it in a productive way. Sometimes having that role model can ground a person, put their goal into perspective, and then set them on the right track.

K: God I feel like we’re in fangirl church right now. What are you doing twenty years from now? What fictional characters will you still be crying over?

L: Considering I just got emotional over The Captain and Maria from The Sound of Music about a week ago, I figure I will still be crying over all of the fictional characters I am currently obsessed with twenty years from now. I will be passing along stories of Diane Lockhart’s leopard-printed BAMF dresses and MacKenzie McHale’s overall badassery to my grandchildren.

What am I doing twenty years from now? I will be the Executive Producer of a 30 Rock reboot, probably, because the only person Tina Fey would trust with that kind of content and commitment is just another awkward brunette from Philly who isn’t afraid to shotgun a pizza or binge-watch Star Wars. On the weekends I will spend my time watching TV on some futuristic streaming service that plays directly out of my eyeballs.

————————
There you have it folks. You can let Shonda make you cry, and leave it at that, or you can BE Shonda. Thanks Lauren! Can’t wait to see where life and television will take you.

You are currently browsing entries tagged with tina fey at Fangirl Therapy.