With the unending details and minor dilemmas of modern day living, there is an ensnaring simplicity to the fictional task of survival. Perhaps it’s callous to love dystopia, to soak up stories where the characters are much worse off than you are, but the fiction shelves of bookstores are littered with these premises. For some reason, we just can’t get enough of the world ending. And rebooting, in the most terrifying ways.

This week part one of Mockingjay, the final book in the Hunger Games Trilogyopened in theaters and is sure to draw in adults and teens alike. While I love the saga as much as the next fangirl, I prefer my dystopia without a side of angsty love triangle. Here are three dystopian trilogies which I think are even better and scarier than the teen sensation. 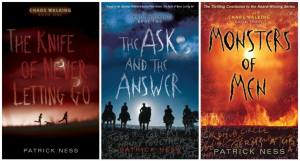 This dystopian meets sci-fi meets western trilogy is my favorite young adult series and relatively unknown. Todd Hewitt is the only child living in a town full of men who can all hear each other’s thoughts. One day he escapes and stumbles across a girl whose thoughts are surprisingly private, and together they discover the strange and violent history of their planet. Ness asks big questions about race, power and terrorism in his epic trilogy, while commanding the power to make you sob endlessly.

The Maddaddam Trilogy by Margaret Atwood

The legendary Atwood says her main task these days is to stay alive long enough to make sure HBO doesn’t screw up its soon-to-exist portrayal of this brilliant trilogy, the third of which hit bookstores this past year. This tale of corporate and genetic engineering gone catastrophic seems not too far from our present. Beginning with the end of the world, the novels wind their way back through the friendship and love story that spun into the chaos of playing God.

If you’re not too attached to the concept of sleeping peacefully, then follow the twelfth expedition into the wilderness of Area X. This trilogy reminds me of the maddening complexities and paranormal mysteries of the hit show Lost. In a similar fashion, we get a behind the scenes peek at the scientists trying to uncover the phenomenon in Area X as well as the horrors that await them once they cross the border.

The Silo Trilogy by Hugh Howey

While some dystopian authors reach far into space, Howey buries the future of humanity deep under the earth. In a massive silo nestled under the now toxic surface of the planet, humans have created an industrious society and hidden their history to prevent any uprisings. When an unlikely candidate becomes the silo’s sheriff, she’s willing to start asking the questions that can save them or destroy them.

The Passage Trilogy by Justin Cronin

Think of The Walking Dead, but imagine that the zombies are also vampires and can jump as high as small building. Scared yet? The “virus destroys the world” storyline may be old hat for some, but Cronin turns the premise on its head with his terrifying “virals” and his trilogy that spans both miles and decades. I couldn’t finish the first book in the series fast enough, and I can’t wait to see what happens in the upcoming finale to this brilliant, blood-curdling series.

Publishers may squeeze trilogies out of authors these days, but these five series are worth every sentence in every book. While the futures they paint might not be so bright, yours will definitely be an entertaining one if you’re willing to venture past District 13 and give them a try.

You can read the original on the Huffington Post here.

You are currently reading 5 Dystopian Trilogies Better Than ‘The Hunger Games’ at Fangirl Therapy.