The Stages of the Ship

I’M SO GLAD YOU ASKED, AVERY. Ships follow many different stages. Some ships will get together on their very first episode, and some will ruin your life for 23 years without any payoff. But I do notice a similar patterns among TV ships that take 4-5 seasons for my OTPs to finally be a beautiful, awkward turtle pairing. So let’s look at the stages it takes for an OTP to finally reach the gates of Canon City.

OH LOOK. TWO PEOPLE WHO MUST COEXIST WHILE THEY DESPISE EACH OTHER. *rubs hands together and cackles* Let’s get started. Honestly, the more conflict the better. Like maybe they arrest each other. Maybe they call each other dumb names. Maybe I burst into flames right now and roll around on the floor.

Slowly but surely, they must learn to work together in a way that allows us to pretend they’re staring at each other butts in the screencaps we have saved on our desktop. This is where we use the arsenal of subtext. THEY’RE IN THE SAME ROOM SO THEY’RE IN LOVE OF COURSE. UGH.

Okay but that’s legit though.

At this point TV writers want to give us a taste of togetherness without untying the ropes from the dock. How do they do this? THE FAKEY FAKE. Two repressed idiots must pretend to be together to avoid awkward exes or complete a professional task. WHAT COULD POSSIBLY GO WRONG WITH OUR EMOTIONS?

Somewhere after goober flirting intensifies, you should expect an ex-wife (or currently estranged wife) to appear out of nowhere, without any explanation. Because WHY would that have ever come up in years of conversation? SURPRISE MARRIAGE. RUH ROH. If you’re lucky, it’s someone like Addison Montgomery who’s so hot you stop caring about the ship in the first place.

After the ex-wife fades into the sunset (or finds someone hotter we can ship her with), our OTP remains cautious. Are there more ex-spouses waiting to emerge? Nay, are there April Nardinis poised to Yoko Ono our beloved pairing?  I HOPE NOT. Usually around this time, while our pairing tiptoes around each other, a friend, relative, or coworker will casually point out that they are both actual idiots for not being together. 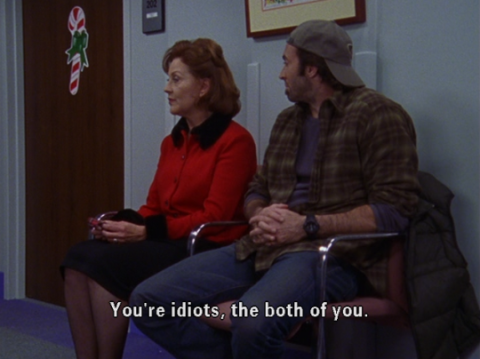 Contemplating their declared idiocy, our OTP usually faces a near death experience soon after. Faced with the prospect of losing their love, they begin to say stuff that makes us crawl under the couch and make strangled llama noises. Much like half of our OTP, we face death ourselves.

Okay, so clearly some feelins have been expressed at this point, so it’s only natural for them to scare the ever loving bejeesus out of our ship. So the only logical thing for one of them to do at this point is to get married to a rando-actor with a 4 episode contract. BECAUSE DRAMA YOU GUYS.

Stage 8:  We Friends But We Not

Okay, so random actor’s arc is over, but we need to stall for Sweeps Week, so what do writers do? THEY MAKE THEM FRIENDS. RUDE. BUT WAIT. OKAY MAYBE NOT. WHAT IS HAPPENING AHHHHHHHHHHH

AT LONG SWEET LAST, that kiss we saw in the promo 84 hundred million years ago is on its way. One person starts making awkward puppy moves that indicate an interest in makeouts. The only problem is the other acts like their alien spacecraft has crash-landed on earth and they have zero knowledge of what constitutes flirting. So as expected, they react in sheer and utter terror.

I’m just gonna leave this one to your imaginations, because we each have our own NOPEs. But at last, we have reached Canon City.

And those, my friend, are the ten stages of the ship.

§ One Response to The Stages of the Ship

You are currently reading The Stages of the Ship at Fangirl Therapy.